The Journal Editorial Board did a critical endorsement of the Bernalillo County Sheriff's Office for ripping that guy off of his $11,000 the other day. It was a really good editorial, except for the fact that they never mentioned Republican Sheriff Darren White's name. That bush loving Sheriff will probably get an endorsement from them for his congressional run against Martin Heinrich, and they just don't want to use his name in vain! But, it was a spot on editorial about abuses of our law enforcement officers. 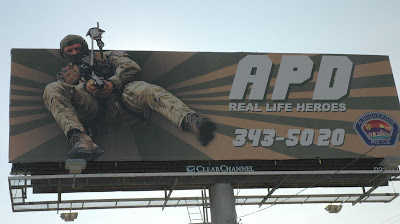 Usually, the Sheriff's office keeps its embarrassments kind of quiet compared to APD. The recent revelations on APD's problems once again begs the question of when they will change their 'boot camp' techniques. There is currently a recruiting billboard up on I-40 for APD that shows a guy in full camouflage repelling down a building in full battle gear. This should be a US Marine ad, not an APD one. Cops should be public servants, well trained and tough yes, but not trained as assault troops with an "us versus them" philosophy and culture. That view certainly showed itself when APD minions were called to Valencia County after the suspicious death of an APD officer's wife. They allegedly destroyed evidence.

The City Council should review the training courses given APD recruits to make sure they are being trained properly. I hope they have better luck at it than when I was Mayor and attempted the same thing. I got no where because of the culture there.
Posted by Jim Baca at Monday, August 25, 2008