When we were eating turkey last week I understand that Governor elect Martinez picked her closest advisors.  She called them the core group.  Missing was the Lt. Governor.  This should get a chuckle from everyone since during the campaign she blamed Lt. Governor Diane Denish for everything. 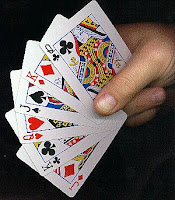 If you really know anything about how Santa Fe works it is that the Lt. Governor only really counts when someone's heart stops beating.  Denish was more active than most Lt. Governors but she didn't set administration policy, even though she was accused of being the devil incarnate.  When the new Lt. Governor gets home from his tour of the state he might want to sit down with Denish to get some pointers on the many different kinds of solitaire games.
Posted by Jim Baca at Sunday, November 28, 2010

Jim - not a comment on this post but a comment on your brother Tom; over the weekend I got to see the documentary on the Smithsonian Channel - Helicopter Missions, Firefight in Viet Nam. Amazing story, amazing soldier - you and your family have a right to be proud of him and his service to America. The show will be on again a few times in December.

Keep up the great posts.