Mayor of the Region 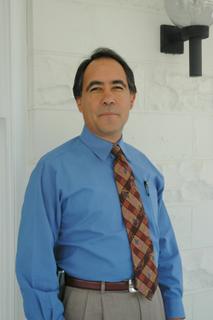 This is Lawrence Rael, Executive Director the Middle Rio Grande Council of Governments(MRGCOG). He has one of the nicest offices downtown with a terrace overlooking Robinson Park. This picture was taken there. Lawrence and I work together on official business having to do with Bosque restoration.

Lawrence was my Chief Administrative Officer for the City of Albuquerque when I served as Mayor. He also held that position for Mayor Louis Saavedra and during Martin Chavez's first term. Marty made a big mistake by not retaining him. ABQPAC would not have unfolded if Lawrence had been around with his good advice and high standard of Ethics.

Lawrence has really led the MRGCOG into a renaissance. This group is finally taking charge of planning for the Regions transportation future. The new Roadrunner Rail system between Belen and Bernalillo will come on line soon and it is Lawrence that deserves a lot of credit for managing its development. Governor Richardson deserves much of the credit too, as do most of the region's Mayors and Council members. Some people joke it should be called the Rael System.

Lawrence is relentless in pursuing his goals and he is a master at finding the resources to get things done. He is also pretty good at the politics and getting diverse groups working together. I hope he sticks around in public service for a long time. He and his wife, Kim Sanchez Rael, have two children and one on the way. Someday I will blog about Kim. She is also a remarkably accomplished woman.
Posted by Jim Baca at Tuesday, July 19, 2005