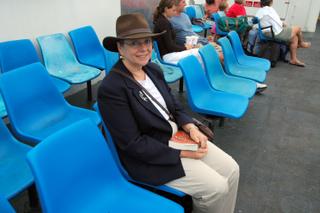 Bobbi and I got into Martha's Vineyard about three hours late on Wednesday evening because the airport there had been fogged in all day. Our commuting marriage is a wonder of efficiency. I arrived at the Boston airport at about 2:30 PM on American Airlines and she arrived at 2:33pm on Delta Shuttle from Washington National.(Yes, National airport, never Reagan...not ever.) We needed to switch terminals and and meet in the middle, which we did within two minutes of each other. That's when we were told to take the bus and ferry which we did. Three hours on the bus to Woods Hole and 45 minutes on the ferry. The bus sucked but the ferry was fun, since we don't get to use them much in New Mexico it was a different experience. 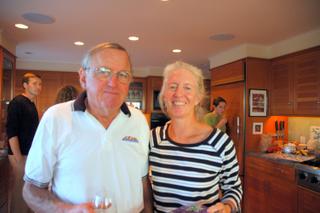 Now to the point of the trip. I serve on the Board of the Wyss Foundation. It was founded by Hansjoerg Wyss, a successful businessman who loves wilderness and wants to protect our special landscapes in the American west. This is a picture of Hansjoerg and Marcey Olajos, a native of Albuquerque. They are always very gracious hosts and it is always fun to enjoy the great wines that are available at dinner time.

As I said in my post last Tuesday, this is really a fun thing to do. Besides doing the work of fully discussing grants and grantee's performance we often have great speakers. 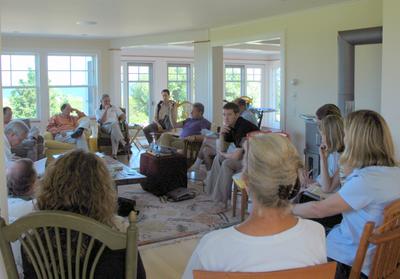 Our speaker this meeting was very impressive. Rob Stein of the Democracy Alliance spent two hours with us. He is the man with his arm in the air. As you can see these are relaxed and comfortable meetings. Staff always sits in too. Stein and the Alliance have done an outstanding job of pulling together data on the American conservative movement and how they have successfully owned the politics of the country by owning the message machinery. This is a great link to visit to learn more details from Alternet..

I really urge you to read it in full. Essentially, Stein says the media message machine has been hijacked by the right because of almost 40 years of continual investment. As the Alternet article says.

"To get their message out, the conservatives have a powerful media empire, which churns out and amplifies the message of the day - or the week - through a wide network of outlets and individuals, including Fox News, talk radio, Rush Limbaugh, Oliver North, Ann Coulter, as well as religious broadcasters like Pat Robertson and his 700 Club. On the web, it starts with TownHall.com. Fueling the conservative message machine with a steady flow of cash is a large group of wealthy individuals, including many who serve on the boards of the Big 80."

Stein estimates that the Conservative message machine is spending about $400 million a year on it's system while progressives and moderates spend about $60 million. That is all about to change as a concerted effort to match that investment has started.

The Conservative movement also owns many newspaper columnists, like Cal Thomas, and they appear in hundreds of newspapers a day.

There is also a large investment in University think tanks by the right wing. There are stand alone right wing think tanks like the CATO institute and Heritage Foundation that never lack funding. Young college students are recruited in to the conservative movement and given full scholarships and post graduate opportunities. Recipients include journalists, communications experts, and other young professionals who are offered wide ranging experiences inside and outside of government.

There is a good chance that with some investment, which according to Stein is available, that moderate and progressive Americans will once again gain a voice. It won't happen over night. Many meetings are taking place all over the country as this effort gears up.

Well, you get the idea. Interestingly enough, I wonder if the conservative movement might have been hijacked themselves by the wacko "neo con" folks. I asked Stein that question and he thinks maybe that has happened and that there are cracks occuring in their structure. I think Senator Frist's departure from the religious extreme right wing on the issue of stem cell research is a case in point. Of course we know that Frist wants to run for President and after the Schivao mess he stepped into he is now reading the polls more carefully. Hmmm, just another DC politico afterall.

A stimulating time in Martha's Vineyard.