My Big Sister Yet Again 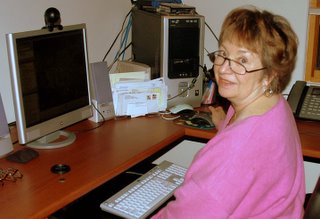 I am really busy today, so I turn my blog over to my big sister , Carlota Baca for a guest blog. This is her newsletter for the New Mexico Association of Grant Makers. She probably wont like this picture either.

Last year at this time, I wrote an essay about families and the passages that they undergo through births, deaths, and the usual bumpy dynamics experienced by people who can’t choose their relatives.

The year 2005 marked the year when my brothers and I became orphans. It wasn’t a surprise and in fact it was a relief because Dad had lived longer than he wanted and was suffering the indignities of dementia. At about the same time Dad died, the was experiencing the political vulgarities of the Terry Shiavo case, about an unfortunate brain-dead woman in a profound vegetative state who became the unwitting tool of a number of demented, cynical and reprehensible politicians. (Hey, Carlota, tell us what you really think!)

The whole business – Dad’s sad lingering and the circus surrounding that poor woman in – provoked me to call my lawyer and arrange a tight and aggressive right-to-die document. She drew up a legal statement that takes it about as far as one can go, given current legal restrictions. I told my brothers that now, if I get really loony, they can take out a gun and shoot me and nothing bad will happen to them. They seemed satisfied.

Family has been more than ever active this December: a niece returning from a semester in Bangkok, another niece and her little nuclear family driving in from their new “starter house” in L.A. (more than I’ll ever pay for a home!), a step-daughter in Austin embarking on a new life of travel adventure after chucking the job, a nephew heading to Central America to do some volunteer work for several months before he gets real and goes for an MBA, a brother announcing a run for political office, and the youngest in the family, Emma Kate, learning how to walk, all duly reported during the Annual Christmas Eve Posole and Tamale Feast in Albuquerque. In my brother Jim’s Thanksgiving Blog, he mentioned 10 things to be thankful for. Well, for what it’s worth, here are some things that are good in my life:

With warmest wishes for a Happy New Year!