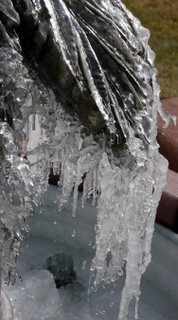 My regular Sunday morning today. Coffee with Brian Sanderoff and then we joined my son Justin and his friend Brendan for a really good burrito at Hello Deli on Candelaria. I thought the frozen ice fountain looked kind of neat at the Starbucks on Rio Grande.

I still am reeling from former state republican party chair John Dendahl calling republican Attorney General candidate Bob Schwartz a buffoon. He said he looked like a buffoon too. Apparently Dendahl thinks that way about Bob because he worked as Governor Richardson's Crime Policy Advisor. In Dendahl's mind no bipartisanship goes unpunished. Now, I have on occasion said such stupid things too and was rightly chastised by the media. It will be interesting to see if the same happens to Dendahl. I think it might. Dendahl is so representative of the right wing hatred within parts of the republican party. I am hopeful moderate republicans will also distance themselves from this remark.

Some critics are beginning to whine about the costs of Governor Richardson's commuter train that will eventually run from Belen north to Santa Fe and then eventually to the border. Well, yes, it will be expensive but in 10 years it will look like the smartest thing we have done in New Mexico in a long time. No, like most public works projects it will not turn a profit, but neither does building endless roads to serve sprawl development. The real value here is that it will save on overall emissions that are threatening our global climate. If you have any doubts about this investment, just take a trip to other western cities and states to see the success of their invesments in light rail and commuter systems.

Speaking of which, I am proud of Senator Jeff Bingaman coming forward to state the obvious,

that global climate change is real and we need to do something about it and quickly. Bingaman took this message to Montreal this week as a keynote speaker to assembled legislators from around the world. The bush administration embarassed us as a country at this meeting.
Posted by Jim Baca at Sunday, December 11, 2005