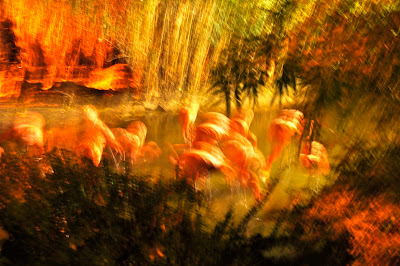 I took this handheld time exposure of Flamingos for a night time photo assignment.  I kind of like it.  It looks surreal, wobbly, in and out of focus.  A lot like many political races this  year.  Mostly it looks like independent voters.  They are the chameleons who transform every couple of years.  I am trying to figure them out.  Two years ago they recognized the lunacy of the bush White House and its new republican wing nut roots and said no more.  Now, after constant tea party fringe attacks, Fox News, Talk Radio and misinformation campaigns they took the bait from the folks they threw out and are turning on the Obama administration.  Question?  Are these people missing some marbles?  Is it the ultimate mass case of attention deficit disorder?   Or am I just naive?  Don't answer that.
Posted by Jim Baca at Wednesday, October 27, 2010

If you figure it out, please let the progressive candidates about it so we can stop this swinging back and forth. Isn't that the definition of independent, "they can't make up their mind?"