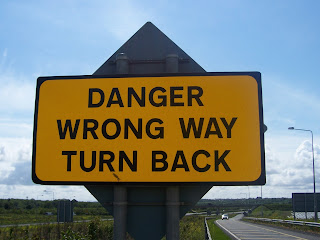 I returned from my nice foray for golf in Durango, Colorado and read that Gary King has announced he is running for Governor.  He just shot off his own foot on trying to successfully investigate the possibly corrupt bidding for the lucrative Albuquerque Racino deal that was aided and abetted by the Governor's office and GOP officials.  Now anything he does will be looked at as 'political' rather than good government.

Who is advising Gary King?  My bet is that no one is there to bounce decisions off of.  If there was this would never have happened.  A first year political science student would see the dangers here.  Now, having said that I am pretty sure why Gary did this.  In his heart, and he has a good one, he just wants to do the right thing.  He wants to find out if there was criminal occurrences going on because it is something we all should know.  And he wants to run for Governor because he thinks he would be a good and fair chief executive.  He has always wanted to follow in his dad's footsteps.  I worked for Bruce King and respected him greatly.

Gary is a good guy.  Some might say he is boring too.  Not much excitement there for sure.  I have known him for  many years and know he is a decent man.  In other words, he is cannon fodder for the GOP.  They will grind him up with indecency while he stays shining and true.

I have a feeling that he will have a very tough time against State Auditor Hector Balderas in a democratic primary.  Hector is new blood and understands modern day politics.  He is also another good guy but he won't be afraid to get in a tough knife fight with the republicans.  If we want to win a general election he is the guy that most likely stands a better chance.
Posted by Jim Baca at Friday, July 13, 2012

I like Gary but he soesn't seem to have the political sense his father had. For myself, it
s a no brainer, Hector Balderas for Governor in 2014 is a very smart choice. He has the right stuff and he will defeat Susana Martinez (whereas U'm not sure Gary can). Gary does need to double down and go after Martinez for the Racino award and do the right thing without the political temerity be seems to have.