Former U.S. Senator Pete Domenici spent some time insulting New Mexico's Environment Secretary Ron Curry in Washington hearings this week.  Curry was insulted for doing his job of protecting New Mexico from harmful effects of nuclear radio active pollution.(and oil and gas pollution too.)  Domenici said that Curry was never elected to anything.  I guess that means that Curry is just a piece of dog crap in the republican mind of Pete Domenici.  You are nothing if you aren't elected in his eyes.  What an asinine attitude.

Curry has been arguably the best Environment Secretary we have ever had in this state.   Rather than serve the goals of  the industry he regulates, he served the well being of the citizens of the Land of Enchantment.  Even Domenici and his children. 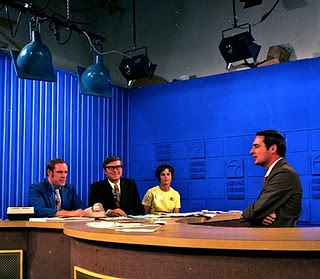 This is a picture of Domenici that was taken when he won his primary for the Senate back in 1972.  He was a good Senator for New Mexico in that he brought home the pork.  The same pork he now says that is threatening our nation via the deficit.  What a hypocrite.  And then he oversaw the disastrous budget over runs of the Reagan and Bush administrations as Senate Budget Committee Chair.  He was against regulation of his friends on Wall Street because all regulation is bad, even ones that keep you from glowing after exposure to spilled radio active waste.

Some one needs to tell St. Pete that it is time to move on into the sunset before more people go ballistic at his insults of good and decent public servants.
Posted by Jim Baca at Sunday, July 11, 2010

Alas, Ron Curry did a good job of standing up to that old fool, better than he's done for the city of Albuquerque regarding KAFB&Sandia Lab's Mixed Waste Landfill.