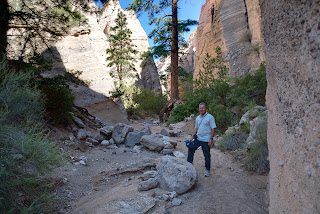 It was a really fun last five days with my old high school buddy Bob Grethel.  We played golf four times and traipsed around the Tent Rocks National Monument in the Jemez on a beautiful day.  You should thank Bob every time you turn on your GPS because he is the one that did the math that made its accuracy so good.  He just retired as a mathematician and scientist.

It will play right into the hands of the Tea Party if things get out of hand in Santa Fe during the special session of the legislature which is supposed to be dealing with reapportionment.  Of course the Governor will love to see chaos since she can just point to the 112 elected officials downstairs and make them the bad guys.  She called out her Tea Party folks to scream about drivers licenses for the undocumented workers.  They were all white senior citizens as far as I could tell and watching them explain themselves on TV was almost embarrassing.  The Governor will probably end up with a lot of bad feelings from GOP legislators too.  They haven't succumbed to the craziness of the US Congress just yet and they will be tainted by this fight as the media will blame everyone, since that is so much easier than getting into some real policy dissection.

The Bernalillo County Commission hired a career employee and professional to be the new manager.  This county government is a big bureaucracy and has usually been run by glad handing and conniving managers, so this is a breath of fresh air.  Of course he may be doomed because of his lack of political deal making, but lets see how he does.
Posted by Jim Baca at Wednesday, September 07, 2011

Prior County Manager, Thaddeus Lucero, was indeed a political pawn and crony guy. I doubt this new person will last long; professionals seldom do when they refuse to play.

Anonymous, exactly. Maybe he should roll some heads and bring fresh management in various departments where the whiff of corruption still lingers.