Yesterday an Albuquerque Journal reporter called me to ask questions on a story they are doing on the 9-11 anniversary.  I was Mayor then.  They asked if I thought the regions economy had been hurt by that horrendous event. I said no.  The federal government started pumping more money in to defense contractors here and hired god know how many TSA employees to grope us at the airport.
However, our economy here is getting ready to be hurt when the Fed budget stops money coming into the state.  Since we get so much of it we will be harder hit.  I am wondering which one of our Military bases will be closed in this contraction.  Kirtland AFB, Canon AFB, Holloman AFB, White Sands Missile Range and other bases in the region could be whacked.  We see little of this speculation in the media. 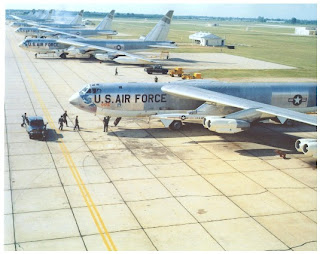 They should revisit the closing of Walker Air Force Base in Roswell several decades ago to see what it did to Roswell's economy.  I contend they still have not recovered.

Governor Martinez got at least a temporary set back in her pogrom on undocumented aliens with drivers licenses after a Judge put her program on hold.  Maybe while all that is being sorted out she could take a trip around the country to seek companies to relocate here.  I can't think of anything more important.
The Albuquerque Police department took down a man who was armed with an assault rifle yesterday.  I can't say if it was warranted or not since I wasn't there, but it may have been.  What is not understandable is the number of police officers that hang around after a shooting has occurred.  If you look at news footage it always seems there are at least thirty cops milling around.  What are they doing?  Just wondering if some enterprising reporter would ever check into the overtime bills on those days.  I remember my days as a reporter when I would go to such scenes back in the 70's.  The cop mobs weren't as big then.  But the ones that were there mostly just stood around and gossiped.  I participated.

Military spending by the US is horrendous! Our "leaders" need to begin looking at closing military bases and operations in countries that no longer need our support, or make them pay the costs. As for bases in the US and NM, they also need to be looked at for closure.

Just wanted to mention a story about the governor's driver being stopped for speeding. I apologize for it being off topic.

Although most of the article was spent discussing Bill Richardson and his driver, it does mention that Governor Martinez' car was speeding while it carried the governor to a local restaurant for lunch.

I thought it interesting that the governor's driver was speeding as a function of hurrying the governor to lunch.

Recall that, as the governor has said, she switched from the Democratic Party to the Republican Party after some Republicans treated her to lunch.

Food, the influence of food, the need to hurry up and get to where the food is... Is it me, or is food a recurring theme in the life of the governor?