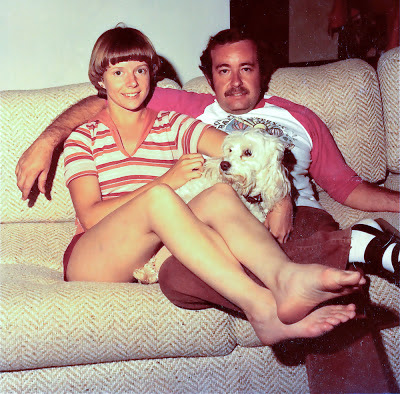 Sunday is our 36th wedding anniversary.  (if my math is correct and you don't count our two years living in sin.)

I was cataloguing some old photos yesterday and came across this photo of Bobbi and I from 35 years ago almost to the day in 1978. We had gotten married on our lunch hour a year earlier so  that we could apply for a mortgage to build a house in North East Albuquerque.  We had been together for almost two years and pretty much figured out we got along okay and we were tired of paying rent.  In the 70's it was difficult to get a mortgage if you weren't married.  This is a photo taken in the living room of our 1400 square foot house which we thought was big!  It cost $43,000 and was well built.

I was working in Governor Bruce King's campaign when this picture was taken.  Bobbi was a principal planner for the City of Albuquerque.  We met at City Hall when I was working for Mayor Harry Kinney in 1975.  We got on an elevator together.  She was an intern in the Planning department then.  The rest as they say is history.

I love revisiting old photos.  I have always taken pictures.  I got my first camera when in grade school and have always had one close by.  Eventually I became a photographer/cinematographer in the Air Force.  The training I received in the military really led to my career in Journalism and politics.  Someday I will tell the story on this blog.

I have about 9,000 photos that I keep in digital form of family and friends all the way back to the early 1900's.  Just as I have enjoyed old family photos from over the years, I think future generations and grandkids will enjoy them too.  I know some folks that have never taken photos and it is sad that history won't be there for the future generations.
Posted by Jim Baca at Thursday, June 13, 2013

You both look so young, but I guess that is the case for all of us over the age of 60. Congratulations on 36 years of marriage. You are incredibly compatible or you both have great negotiating skills and patience (I suspect all are involved).