Death Comes to the Range 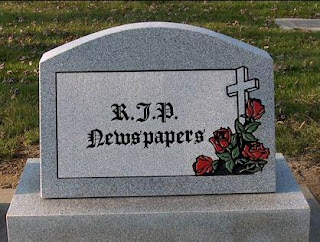 Every Journalist in the state must see death of their profession lurking over their shoulder.  The demise of the Raton Range because of falling revenues, population, and readership was just a matter of time. Small newspapers are going fast around the country.  Unless they are big enough to be bought by rightwing corporations headed by the likes of the Koch brothers, then there are no lifelines for them.

The Albuquerque Journal's ever diminishing content and ever increasing right wing view of the world can not be offset by doing their editorial cartoons in color.  That is the only big change I see in that poorly edited paper, except for occasionally insightful and entertaining columns by Winthrop(corrected) Quigley and Leslie Lithicum.

Will the Journal be around for long?  Probably, but in a radically altered state perhaps.  One might see them dropping their Saturday and Monday editions, or even more.  It might be the only way they can save themselves.  It might help if they gave less of a neocon view of the world on their editorial pages.

I really want to see professional journalism exist in widely read digital and paper formats.  I don't want to have to rely on social media for my information.  And perish the thought that the only news we get would be the sex story of the day on TV News and a run down of the police blotter and five security camera videos of the day.
Posted by Jim Baca at Tuesday, July 23, 2013

Old newspaper joke: I don't care what you say about me, just spell my name right.

Twice now you have referenced "Wynn" Quigley. His name is "Winthrop," sometimes shortened to "Win."

If you ask me, The Albuquerque Journal is already dead in the water. The editors just don't accept that they must adapt with the times. To do that, the owners need to replace "Got that, Kent Waltz" (compliments of Joe Monahan for that catchy phrase).

There's no longer a need for newspapers. They arose to fulfill a need. The need for the electorate to be informed and for there to be a watchdog over government.

People have no problem with the government spying on them. The government starts wars it doesn't have money for, against people we have nothing against, assassinates US citizens with drones, takes money from working people and gives it to rich people, enables a system where the wealth our labor creates goes to someone else, and no one cares. They really don't want to hear about it. What is there for a newspaper to do?

I write about this stuff all the time. A few people click on my web site but there are never any comments, so they probably don't bother to read it. People aren't interested in being informed. It's too much work, what with all that's on their plate already, entertaining themselves in the little free time they have leftover from trying to survive.

Newspapers have outlived their usefulness.

In the Journal's case where will get newspapers to train our puppies?

I read Bubba's blog but I can't add anything to the posts so I don't click on the comments. The Journal doesn't add much to any debate. It feeds the rich and buries the poor. It puts the Republicans on the front page when it is something they think is going to advance their interests and buries the bad press in the newspaper if it mentions it at all. It prints popular headlines at the top of the fold (new baby to the royal couple, such and such movie is out, blonde cage fighter, etc) but does next to nothing to bring anything to the table. Most shocking to me was a full page ad with Kent Waltz as a speaker for a UNM health sciences grant issue. Color photo of "Got that Kent Waltz" included. What?!

Bubba,
If it was just people being ignorant it would be bad, but we now live in an age of endless disinformation, much of which feeds into our worst fears and prejudices. Instead of pulling us up, our elites, especially "journalists" are purposefully misinforming us to keep the bosses happy.
I'll check out your blog too! sounds like fun.