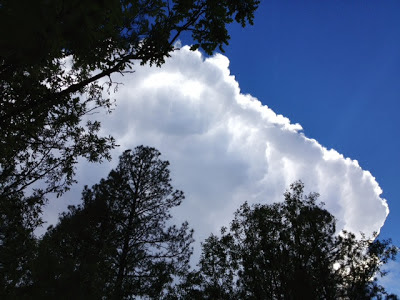 Very nice. This is the kind of picture you take that demonstrates what I call a "visual idea" and why your photography is so interesting. The "idea" being what the picture is about. What it evokes in the viewer, which is more than visual, but which is evoked in large part by the arrangement of elements in the picture. It's really, I think, what separates art from simply explaining. What makes art art. It doesn't have anything to do with high resolution or galleries or styles -- not that those are bad, they just become ends in themselves -- but with the idea itself, what the artist sees and tries to express. I've been working on a blog post, off and on, that explains what I mean by visual idea. I hope to finish it some day.

Driving at night last night and thinking about my "visual idea" idea, I wondered if I"d oversimplified my comment to the extent that I diminished what you do, but I see now that I did qualify it by saying that arranging elements in a frame (or on a canvas or wherever) is just part of what you do.


You know, I started thinking about the visual idea after you ran those two cat pictures back to back, because although ostensibly having as a subject a cat, they are two very different kinds of pictures, and thus good vehicles for discussing what I'm calling the visual idea.

One cat picture is relatively simple, the other complex, one is straight on, the other from an oblique angle, one has an infinite background, which is more or less the sky, the others' is finite, the flat plane of the wall. And god bless your cats, but they are actually kind of incidental to the overall scheme of things, as far as the "visual idea" of each picture goes. There's just a lot more going on there besides cats.


But yes, you do have a genius for looking and seeing, and you have sufficient skill and sense of design that you can translate what you see into something that's not only beautiful but is such that we can see what you see. "Seeing" being kind of a shorthand way of saying something that "engages all the senses," as they say in the art books, although my theory is that it engages the unconscious. Yours engages ours. Some of the communication doesn't even rise to the conscious level.


Alas. My existence consists of keeping that truck running, driving it, eating, sleeping and paperwork, in no particular order, rather all at once continually, and a few stray comments here and there when I go past the computer.