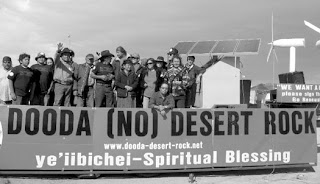 The Navajo and Hopi tribes have told environmentalists they are not welcome on the reservation lands because they object to coal fired power plants. This mainly concerns the Desert Rock Power Plant that would buy coal from the tribes. That would be needed cash for the tribes, but those plants could eventually kill us all. It is a disturbing thing but not unusual that any particular group cares more about economic development than the health of the planet. That certainly is not just the attitude of the tribes. However, there are a fair amount of tribal members who object to these dirty coal fired plants too.
Mayor Marty Chavez has picked up the endorsement of the rightwing NRA. Marty doesn't have to worry about concealed weapons in his personal space because he has full time body guards siphoned off the Police Department. He is the first Mayor ever to pull away police from crime fighting to open his SUV door for him. Also, concealed weapons are not allowed in city buildings so he has more protection than you do at the movie theater.
State Land Commissioner Pat Lyons is trading away valuable commercial property from the state land inventory along the border with Mexico for another ranch. While this trade is even constitutionally questionable I wonder if the meager grazing fees it will bring in comparison with revenues that might be made off the border land isn't another rip off of the trust. There was only one bidder on the deal. This stuff is all done almost invisibly.
Posted by Jim Baca at Thursday, October 01, 2009

Do you have a link to the story regarding the land swap by Pat Lyons? I'd sure like to read it!

"Two solar energy developers have taken the first steps in developing up to 1,425 MW of utility-scale projects in New Mexico.
BrightSource Energy, based in Oakland, California, and NextLight Renewable Power, based in San Francisco, have signed five option agreements covering 21,400 acres with the New Mexico State Land Office. The options cover state trust lands in Luna, Hidalgo and Valencia counties.
Once a long-term lease is executed, BrightSource intends to build a 600-MW facility in Luna County and sell the power to the California market, according to the department. The developer is considering developing up to 400 MW in Hidalgo County. The projects are in the very early stages of development, said Keely Wachs, a BrightSource spokesman.
NextLight is considering building a 50-MW photovoltaic plant on its Valencia County site, a 125-MW concentrated solar plant on its Luna County site, and a 250-MW CSP plant on its Hidalgo County site, according to the department. The projects also are in the early stages of development, said Jim Woodruff, NextLight vice president for regulatory and governmental affairs.
BrightSource and NextLight are not alone in exploring the potential for solar power in New Mexico. Currently, developers with 12 solar-related projects totaling 1,800 MW have asked PNM Resources to study potential interconnections with the Albuquerque-based utility's grid system. Eleven of the projects filed interconnection study applications this year. The projects range from 100 MW to 250 MW."