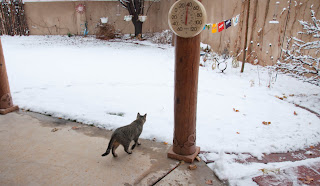 Hermes the Cat got a look at his first snowfall today. I am not sure  he was convinced it was a good experience. 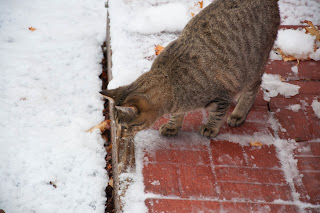 I got my first look at the new State of New Mexico Website today that makes it easy to look up some basic information.  It was a lot easier to check in on how much money the state has in its rainy day funds.  Over $13 billion right now.  We are in very good shape compared to most states.  That is why I think Senator Michael Sanchez's plan to tap into the Severance Tax Permanent Fund for some operational funding is a good idea.  That is a lot of money that could be creatively used along with some cost cutting.  I have a feeling that the republicans and the new Governor won't like that because they see it as not adding pressure to permanently reduce government spending.  And realistically until Medicaid costs are controlled we will face everlasting problems.
Posted by Jim Baca at Friday, December 17, 2010