I have always been aghast that young people haven't shown more civil disobedience in the last twenty years.  It is like their parents, the baby boomers of the 60's passed on none of their idealism.  Strange.  But now, at least in the UK, it appears the students there have finally had enough as the government tries to raise tuition rates.

The same thing should happen here in the US.  If, for instance, UNM hikes its tuition then the students should take over the University Admin offices and the capitol building in Santa Fe and demand that higher education be made affordable again.  In the 60's and 70's that would have happened.  Now maybe it can again. 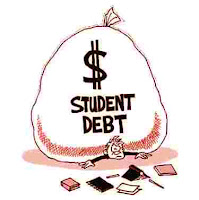 When I was a student at UNM I received benefits from the G.I. Bill that paid my tuition expenses with some left over for food and board.($220 a month.)  We didn't  have to worry about student loans back then.  Higher public education was affordable. But then someone, somewhere, decided that it was too cheap and that the banks could make money lending money to students for their educations.  So, they worked with Universities and Legislatures to make loans in tuition, room and board. Now the loan rates are downright usurious. 7% and higher on my kid's existing loans.  But the rich get tax breaks and we give subsidies to the oil and gas industry.  And those existing loans still have high rates even though we bailed out the damn banks.  It shows where education stands in this country.  And yes, there is a lot of waste on some campuses.  Just fix it.

I hope the young folks get madder than hell.
Posted by Jim Baca at Friday, December 10, 2010