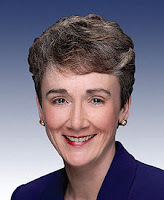 People and the media need to stop and think occasionally about the hypocrisy that republicans always seem to get away with.  First, think of the pay to play allegations that the republicans are constantly leveling at former Governor Bill Richardson.  The Albuquerque Journal loves to write and rewrite about it constantly.

But, since the Journal is so right wing these days, they ignore the scandalous pay to play schemes that GOP Senate Candidate Heather Wilson has been involved in.

Heather has casually admitted in an Albuquerque Journal interview that she  has been making her living for the last three or four years as a 'defense and intelligence' consultant.  Now, who would her clients be?  Would they be the private corporations that manage our national labs?  Such as Lockheed Martin?  Heather spent years as a congresswoman making sure that taxpayer money flowed to these groups and other defense contractors.  They in turn used Sherman McCorkle of the Technology Ventures group, which they funded, as a major political supporter and fundraiser for her.  Now that she is out of office they continue the pay to play scheme with her by giving her fat contracts.  And those contract funds, no matter what they say, are really funneled into the corporations by wasteful defense contracts funded by the American Taxpayer.  You know, the weapon's budgets that are constantly over running budgets.

I think Heather Wilson needs to immediately make public who is providing these contracts to her, how much they pay, and identify the actual work she is doing for them.  No need to mess with classified information, which they will certainly say keeps them from divulging the information.  Just the basic facts will do.

If the Editor at the Albuquerque Journal does not aggressively follow up on this issue, then you can completely cross them off the list of ethical and professional newspapers.
Posted by Jim Baca at Monday, May 30, 2011

Wilson's cozy relationship with defense contractors is just the tip of the iceberg when it comes to politicians on all sides getting paid for their votes. Politics and ethics are certainly not synonymous. I guess, like me, you could stop subscribing to the Journal rag.