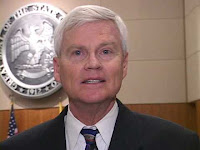 It is hard to find a more fanatical right wing republican than Rod Adair.  And he has just been hired by the Secretary of State Diana Duran to run our state's elections.  He is an ally of the extremist political advisor to Governor Martinez, Jay McClesky.

The Democratic party must immediately start camping out in the bureau of elections to make sure voter registration rolls are secure from manipulation under Adair's leadership.  He will be a big fan of voter suppression when it comes to the poor, progressives and others who might not see extreme conservatism as something that is good for their futures.

I wonder if the media will give this disastrous appointment some scrutiny and analysis.  I wonder if the legislature might be able to take action to protect the long time effort of keeping this Bureau of Elections out of the hands of extreme partisans.  We all remember the great leadership of the late Hoyt Clifton in that position.  That is the kind of person that should fill such a an important role.
Posted by Jim Baca at Saturday, January 12, 2013

'Ovem lupo commitere' ('To set a wolf to guard sheep.')